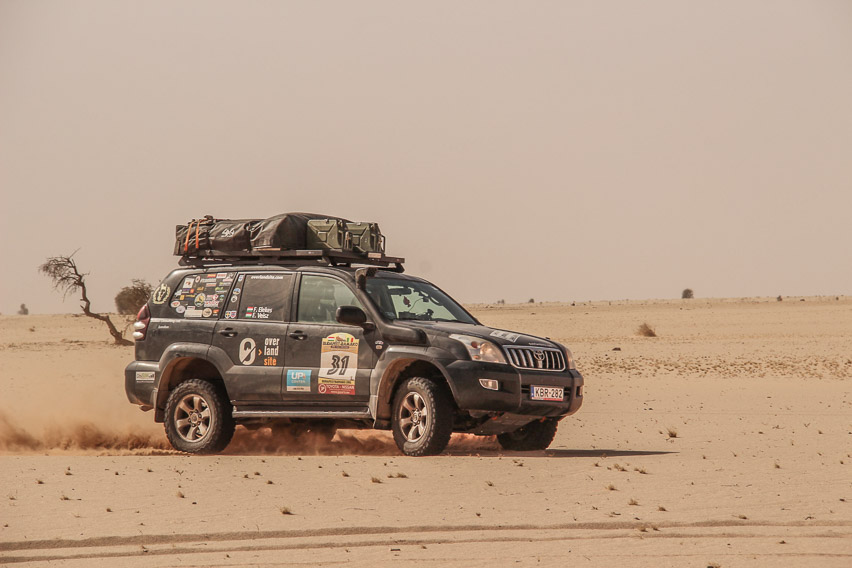 What is the Budapest-Bamako Rally?

January 13, 2018: Not much happened on this day other than trying to get as close to Almeria, Spain, where our ferry left from, as possible. Motorway miles, just to get to the end of the continent. Let's talk about the Rally itself then.

So what is the Budapest-Bamako Rally?

The short answer: a great adventure, driving from Budapest, Hungary, usually to Bamako, Mali in just over 2 weeks.

I say ‘usually to Bamako, Mali’ because this year the destination had been changed to Banjul, The Gambia for security reasons.

Parts of Mali and the capital Bamako apparently got more dangerous over the last couple of years, prompting the organizers to change the location of the finish line to Banjul.

However, the name remains Budapest-Bamako Rally.

The longer answer, in addition to the above, is that the rally used to be organized every year but nowadays is held every 2 years, as every other year the company organizes another rally from California to Baja.

The itinerary is given, you are provided GPS points and there is a starting and finishing point every day, as well as a recommended or suggested place to spend the night.

This can be a hotel or a campsite. You pretty much know where you’re going to be in the following 16 days, but other than this you’re on your own.

In practice this means you end up driving with one, two or more other vehicles together, so you are not really on your own, but what you get from the organizers is this: a great itinerary, help with obtaining your visas and medical help from two medical teams, should it be needed.

Unfortunately, one of the teams did – more on this sad event later.

Many of the participants sell their vehicle at the end destination and then fly back home.

There are also folks who ship their better-kitted trucks to their next destination or perhaps home, and there are times when teams have donated their car to a local charity or school.

There are different categories to take part in: Race, 4x4 Touring, Touring and Spirit.

The Race category has to complete different navigational and other tasks. The 4x4 Touring, which we joined, receives all the GPS points of the Race category but doesn’t require the completion of any tasks.

In other words, you get to see the most amazing scenery that requires a 4x4 vehicle and good equipment (extra jerry cans, sand mats, etc.) but without the burden of completing tasks.

The Touring category takes you to the finish line on highways, or at least on roads that don’t require you to have diff-locks.

Finally, the Spirit category takes the same route as the Touring category but the vehicles are comic, to say the least, in the best possible meaning of the word.

I will cover the vehicles in a different post.

In general, this is what we think about the Budapest-Bamako Rally. This does not intend to be a balanced review, but purely how we saw the Rally in general and reflecting our experience: The very best thing is the people you end up meeting. Over the 16 days, there were tough moments when we relied on other people’s help and advice.

There were times when it was great to share a beer or two in the free-camp in the desert, and just get to know really great people in a very fun environment and in great circumstances in general.

I don’t know if, out of the several hundred people who participated in the rally, we always ended up meeting like-minded folks or we just got lucky, but we met some really awesome people who we hope to keep in touch with in the future too.

As I mentioned before, we have never been to Africa, let alone on an overland trip, so we didn’t know what to expect; one of the main reason why we signed up for the rally rather than going to Africa on our own, although we wanted to do a lot of exploring on our way back.

So the other very good reason to sign up is the route itself.

Participants are given GPS navigation points to follow and these points take you to places and roads (though some of them cannot really be called roads) that you otherwise would never have dared explore.

Some of the places we saw were truly outstanding.

Emails from them are passive-aggressive during the preparation period, with a hidden suggestion that you shouldn’t dare ask any questions.

Then you’re an idiot, simple as that.

The rally is also relatively expensive in comparison to what you get in exchange and how you get it.

Some of the rip-offs at border crossings, unnecessary ‘extra fees’ for smoother visa applications, etc. leave a bad taste in your mouth too.

I will cover this part from the perspective of future participants, in an effort to show exactly what you get and what you don’t for your money and what you can expect from the organizers.

I mention this because the ugliest part of the rally was a horrific accident that happened during the Mauritanian stage, but as this post is trying to cover the general spirit of the rally and the attitude of the organizers, the accident will be covered later in a separate post.

As it happened, we met wonderful people during the rally – or should I say we got to know wonderful people but also met folks we would not necessarily want to spend much time with. And we didn’t, but we still saw them around campsites, hotels and restaurants.

As it happened, there was a Tesla X among the participants (yes, a Tesla! With a Guinness World Record attempt. Again, more on this later).

Naturally, there are no Tesla superchargers in the Sahara Desert (yet!), so in one of the desert campsites they had to use the aggregator from their support van to charge the Tesla’s batteries for the next day.

Of course, this was an improvised campsite in the desert where an aggregator with a petrol engine is the loudest thing around for miles, which annoyed some of the other folks.

Fine, not good, the aggregator is annoying but hey, what can you do?

Well, some of them went as far as attacking the Tesla team by physically assaulting them and throwing AA batteries at them.

It got worse when the organizers turned a blind eye to all of this even though they were probably only 30 ft away, and when questioned in the event’s Facebook group did not even comment.

In our opinion, how they handled this ugly situation is completely unacceptable.

The funny part of the story is that the same aggregator used for the Tesla in the desert saved the finish-line ceremony, replacing the failed local aggregator to inflate the Budapest-Bamako Rally gate in Banjul.

Of course, the assaulting team happily drove through the gate, no issues. I have mixed feelings about the rally.

Would I go back in time and cancel my subscription knowing the organizers’ attitude and sometimes incompetence, but then not meeting those awesome people we ended up making friends with?

Absolutely not. The memories, the experiences, the conversations, the sometimes scary and difficult situations – they were all worth it.

Would I recommend the rally in the future though?

Definitely not. Having said that, a rally of this size, with a route through countries like Mauritania or The Gambia takes a lot of effort, experience and hard work – the Bp-Bamako Team undoubtedly worked hard to put such an event together.