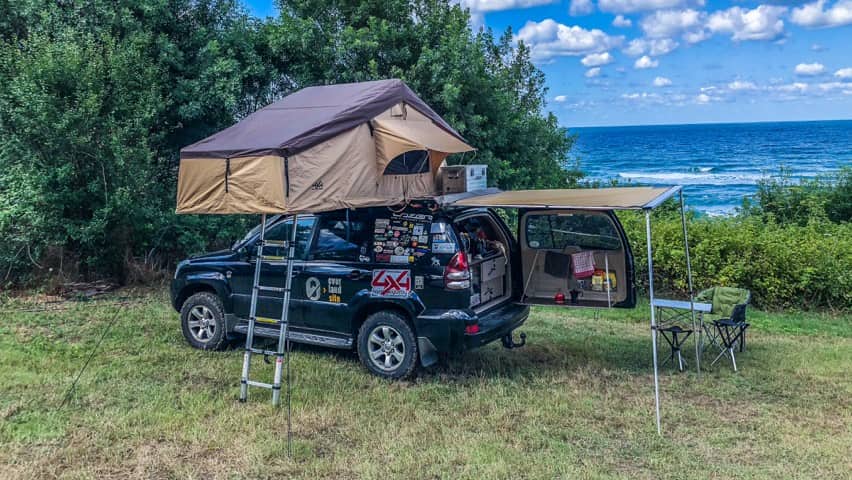 Overlanding in the Rain

We woke up to some nasty, rainy weather – the kind that won’t seem to stop all day. And it didn’t. Quite a bad day not to be on the move. I prefer driving in rainy weather than staying in a campsite.

But since this was a campsite with restaurants and other amenities we decided to stay, since we had lots to reorganize inside the rig and I still had to solve the issue of the rooftop tent not opening properly. I had already identified the issue the previous night, which was that the awning’s holding brackets were getting in the way of the tent opening completely.

After dismissing the option of the better Front Runner brackets (I actually quickly ordered them then cancelled the order), there were two solutions to choose from. Either the tent or the awning needed to be moved to another place on the roof rack.

I deliberately chose the 1.4 meter awning instead of the longer ones, because it fit right on the back of the roof rack, giving us shelter from the sun and rain while we were cooking or eating and the rear door was open.

The position of the awning actually proved to be perfect on this day as Evelin was repacking our stuff in the back of the vehicle. Considering this and the fact that my father also reassured me on the phone (he is the best DIY person/handyman around! - For example we made this great DIY creeper together!), it was obvious that the rooftop tent needed to move to the front and then our Enders aluminum box to the back of the rack.

I wasn’t totally happy with this, because we have heavy(ish) items in that box such as spare parts, engine oil, etc., so I preferred that to be between the wheels. Having said that, the rooftop tent isn’t exactly lightweight either, so perhaps the move didn’t even affect the weight distribution. Moving the rooftop tent wasn’t an easy task on my own, but I managed to do it eventually. The upside of the new roof rack set-up is that I can now access the alu box much easier.

It rained all day in Sozopol and we stayed at the Gradina Camping site the whole day. Local reviews gave it 4-5 stars on Google, which is why we went there to begin with, but while we found it okay, it definitely wasn’t worth 4-5 stars. We’re thinking we’ll have plenty of opportunities for wild camping and be away from civilization later on, so initially we’ll be staying in campsites where we might meet other travelers as well as be able to enjoy some comforts, like having running water and a toilet around.

It was raining the following day as well when we made our way to another campsite, this one about an hour away from the Turkish border. Our destination was Camping Delphin and we didn’t have a long drive through the countryside and by the coast. Somehow we had a feeling throughout Bulgaria that the country has a long way to go in terms of, simply put, looking nice. In inhabited areas, that is. Rubbish seems to be scattered everywhere, buildings look knackered, roads are not well maintained. Camping Delphin wasn’t any different, but we managed to find a really great spot not far from the beach. I managed to work a bit (with my partner at the time in the US I coordinated the Ozark Trail cooler review that was being done, and I had to be on top of that to make sure it's a quality piece of work) and Evelin had time to exercise. Exercising during a trip like this isn’t easy but we’re trying to make an effort. At the previous campsite we went for a run as well. Later I’ll be posting an article about exercising while overlanding, so stay tuned. We had a really great evening at this spot, setting up our camp nicely and making great burritos for dinner.

The next day we drove through a national park with a horrendous asphalt road but beautiful forests. Just as for the Bamako Rally, Evelin and I are sharing the drive 50/50, with Evelin tackling the potholes of the forest road to the Turkish border. The process at the border was relatively quick, since it was only a small crossing point.

It was around lunch time when we came across the first town, and we were keen on some Turkish kebab. We had a couple of campsites in mind so after lunch we headed south toward Silivri, a holiday town west of Istanbul. The first campsite (Semizkum Mocamp) was a mess. Facilities were dirty, everything was broken and in general, it just wasn’t a welcoming place. We decided to carry on to the other campsite, the Istanbul Mocamp. I can highly recommend this place. They even have a helipad, not sure why. The owner is super friendly and so are his dogs.

Too bad the clouds just didn’t want to clear. ⁣Can you name 3 advantages of the rooftop tents

⁣Exercising in the Gobi. It's very important to