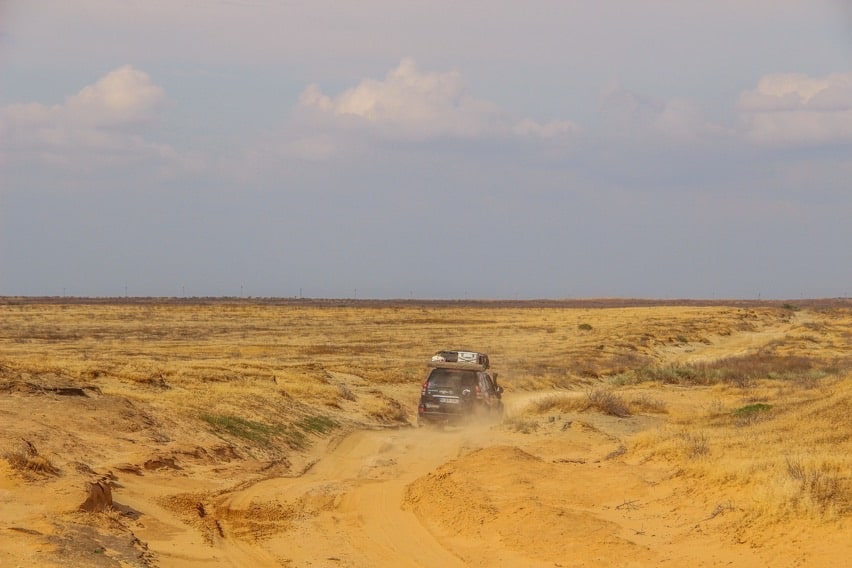 Updated by Overlandsite February 24th, 2020
Blog 2
The reason we drove all day this time was that we didn’t want to stay in a random hotel in a small town in Abkhazia. We wanted to reach Astrakhan, a larger town right on the border with Kazakhstan. This city was 400 miles away, however.

Driving in this part of Russia was much easier than I anticipated, including the North Ossetian and Chechen parts. Roads are smooth here and there are plenty gas stations. Since there are several sort of independent republics within the Russian Federation, there are border checkpoints too.

To our surprise, there was even a border post with passport checks at the border between Dagestan and Astrakhan Oblast.

This is where those smooth roads I mentioned suddenly just ended, to be replaced with a one vehicle-wide sandy track in a desert-like area. It was the most fun part of the day. The tracks still allowed us to drive around 50 mph, so we didn’t lose much time.

This section lasted at least an hour, but by evening we arrived in Astrakhan city which was much bigger and nicer than expected. I keep promising to myself that I’ll read about all the places we didn’t research before the trip but that we just stumbled upon and found interesting.

We had a great burger (how authentic!) in a downtown restaurant then headed to the hotel that we’d selected on maps.me.

The hotel was just outside the city and judging from the pictures, had safe parking, which is always a priority when we’re staying in a hotel.

I think the receptionist wanted us to go away as she said they only had the large suite vacant, and otherwise were fully booked.

We knew for a fact this wasn’t the case but couldn’t really argue in that situation, so we took the “suite” which wasn’t expensive anyway. It was a long day and we were keen on having some rest by this time. According to a check-in on iOverlander, the border crossing at Astrakhan into Kazakhstan was pretty quick and straightforward - good news after two painful border crossings into and out of Georgia.

We can actually confirm that the border crossing at Astrakhan is one of the easiest ones in Central Asia. I’ve been to all of the countries in the region with the exception of Afghanistan and Pakistan, and this border crossing was the easiest by far.

Within an hour we had our passport stamped, the vehicle researched and were on our way to Atyrau, an industrial town on the Caspian Sea.

The road from the border is in appalling condition. You can’t achieve more than 30 mph and even if you do, you’ll run into some nasty surprises in the form of massive potholes down the road.

The road was so bad that some of our stuff inside freed themselves from where they’d been tied down. Also, the screws holding down the fabric box on top of the drawer system somehow broke off from the plywood.

I don’t think we realized just how big Kazakhstan was when we planned the trip. It’s not only the largest landlocked country in the world but also the 9th largest country period.

However, with a population of less than 18 million, towns and villages are very far apart with very bad roads connecting them.

For this reason it’s quite hard to plan a trip because even if you’d like to go, let’s say, east, there might not be any roads going that direction at all in your area. Our initial plan was to visit the Baikonur Cosmodrome spaceport, as I’d have loved to see the museum and the facilities around the area.

However, we looked into it when we entered Kazakhstan and it turns out you can’t just rock up, pay an entrance fee and visit the Cosmodrome. You have to book your tour with one of several agencies and pay a very high price for visiting the place.

Not only that, but from Atyrau it’s more than 1,000 miles away due to roads not going east at all. So driving there meant we would’ve had to head north first, then a few hundred miles east, and only then driving south. Naively, we thought we’d find a rural road going south-east so we could also visit the Aral Lake, or at least the remaining small part of it.

While we could’ve found a small road going south or south-east, we’d then have spent at least a month in Kazakhstan, which we couldn’t afford. Planning using time rather than miles is what works better in Kazakhstan.

Also, even if you find a road that you think is in line with your plans, the road conditions might be so bad that you need to replan the whole route. Eventually we had to forget about Baikonur and even the southern part of Kazakhstan, instead deciding to drive north toward Uralsk and then head to Astana.

On this route, towns are so far apart that you can drive literally for hours until you come across the next town.

Road conditions are varied, which means you have to be careful at all times and not get lazy with looking out for potholes.

The worst thing is when the road looks fine and then suddenly, without any warning signs like cracks on the road, you crash into a massive pothole that shakes the whole vehicle like it’s about to explode. It took us 3 whole days to reach Astana, with long hours of driving and a wild camping, hotel and guest house stay along the way.

As the area is completely flat and there are hardly any cities around this route, there isn’t much to see and the landscape doesn’t change either.

Given the flat area, we didn’t have the usual engine overheating issue but because the AC hasn’t been working since that dusty day in Senegal in February, we were baking in the car in 97 degree F (36 C) temperatures

The weather only changed when we arrived in Astana. It was due to rain for the next 3 days - great weather for sightseeing! Sign up to our newsletter learn more about overlanding!