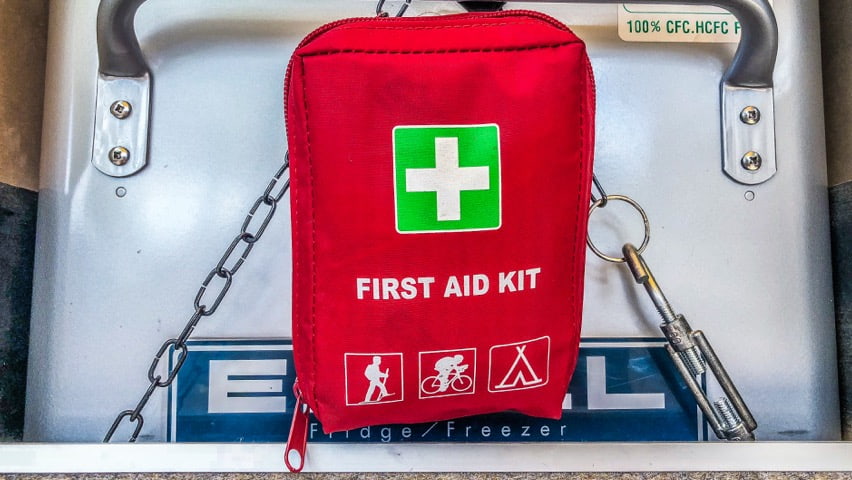 Essential Overland Gear or What We Use – Part I: Safety

Rather than just writing about where we are and what we do, I’m starting a series of posts about the overlanding gear we use on this trip, as well as the ins and outs of overlanding from our perspective and limitations.

Our point of view means the equipment we use is based on and influenced by the fairly compact vehicle we’re driving, our current itinerary, and previous experience from about 25,000 miles of overlanding (some of which is already documented on this site).

In this post I’m going to talk about safety - what we brought and how we prepared. First of all, a few days before we departed, we took a one-day course on first aid. This was just a very basic first aid course, mainly on vehicle and traffic-related accidents.

We’d both completed one before but it was such a long time ago that what we learned during the this course felt almost completely new to us.

Hopefully we won’t actually have to use any of the knowledge we picked up on that day. It goes without saying that we have first aid kits with us. No overlanding vehicle, in fact no vehicle of any kind, should drive one inch without one.

We have two kits. The first is a small one that’s accessible at any time, right in front of us when we open the back door. We see it all the time when we do, several times a day, which means we know it’s there even unconsciously. This is just a kit for small injuries, cuts and bruises. While the small first aid kit is an off the shelf, ready-to-go package, our larger kit was put together by Evelin with the help of an expert.

It’s got all the bandages and other necessary items to treat trauma, burns and injuries. However, it goes beyond first aid, as this larger bag, which used to be a picnic bag, also contains medicine for all kinds of stuff. Catching a cold or having a sudden allergic reaction to something should not find us unprepared. 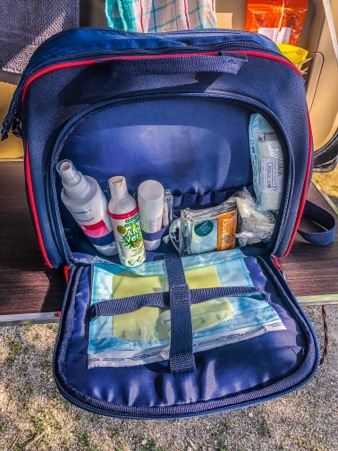 The fact that the bag used to be a picnic case means the inner part is insulated, which serves well as a container for all the drugs.

The bag even contains an emergency blanket.

One of the biggest risks for overlanders is fire. Often when you overland, you find yourself far away from civilization, and therefore from any additional help, if your rig happens to catch fire.

Dry grass trapped between the bash plates and different parts of the suspension, or simply just stopping for a moment over tall grass with your hot engine and exhaust pipe, can easily start a fire. Quick reaction is essential.

What’s also essential is to have fire extinguisher(s) in your vehicle. 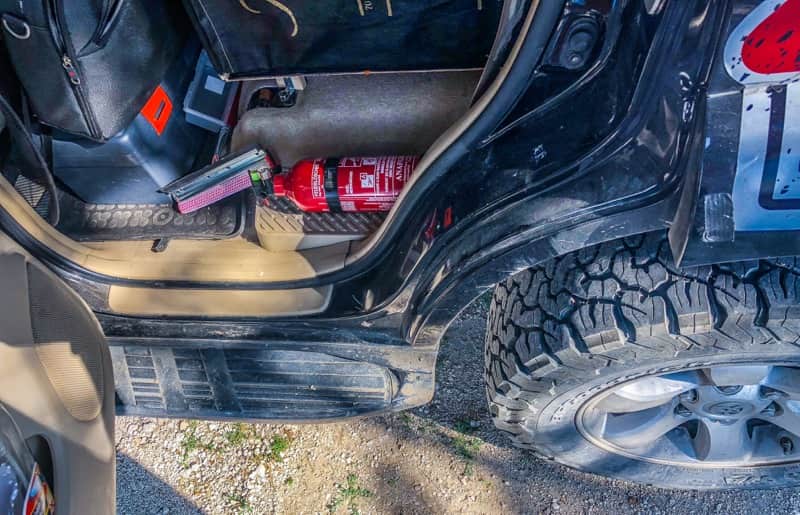 We have two 2.20 lbs (1 kg) fire extinguishers on both sides of the vehicle. They’re mounted just inside the vehicle when you open the rear passenger doors. I’ve spoken to an expert on fire extinguishers and also done my own research on the subject. The main concern I found is that these small extinguishers, even two of them, can only stop a fire that’s just started or just about to spread from a small source, but can’t stop one that’s already starting to swallow a car.

Even though fire is a big concern due to weight issues we’re not carrying a more effective 13 lbs extinguisher on this trip. We’re avoiding potentially hazardous terrain and just being really careful in general, though it’s good to have the peace of mind that we still have two fire extinguishers within reach.

I wanted something for self-defense other than just my bare hands (which probably wouldn’t be too useful anyway).

Large knives or a gun are out of the question. I guess a baseball bat could become a weapon, but only from a very short distance and it’s too bulky. That’s how I ended up buying pepper spray.

I’ve never tried it and hope I never have to, but again, this item is more for peace of mind than anything else. 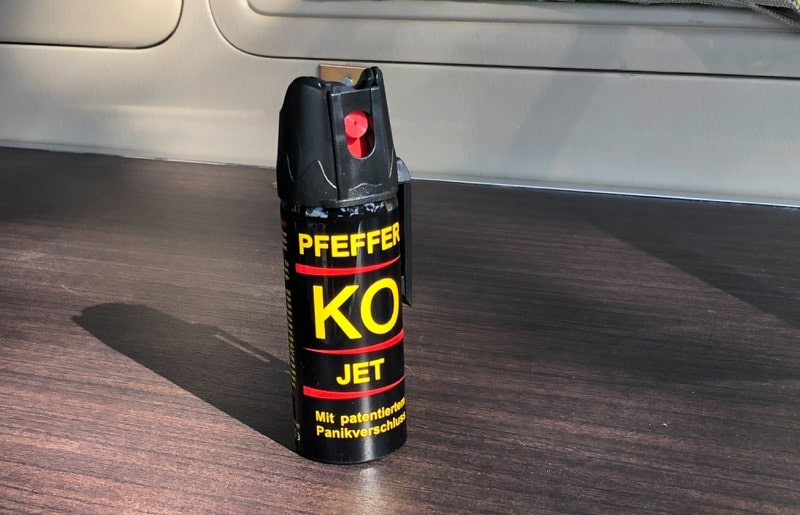 I’m not really sure of its legality in each country we’re driving through over the next 5-6 months, but I’d rather get myself into a situation where I have to explain the possession or usage of the pepper spray than one where there’s nothing we can quickly use in order to defend ourselves, either from wild animals or another person.

In addition to the above, I mounted a safety tool that could be a life saver in case on an accident.

This simple little tool is mounted to the roof lining in between the seats so that it's reachable by anyone in the vehicle.

It can be used to break the windows, thus creating an emergency exit from the vehicle but can also cut the seatbelts with one quick move, should they not get released by their usual button.

Collecting relevant information in the process of preparing for an overland journey also adds to your safety while you’ll be on the road.

Planning your itinerary is the first step.

Once you have a rough idea in mind you can then research if there are any areas to avoid during your trip. That could be whole countries or just bad neighborhoods in the area of your destination.

We’re still doing some research ourselves on how to get to the other side of the Caspian Sea. It’s mainly about logistics, but part of it is also to check if there are any unsafe regions around our route.

Mainstream media is not always the best source of such information.

The best information comes from people who’ve actually been there.

Travel forums are a great place to start your research, such as Lonely Planet online forums, but the most relevant information for an overlander is in the iOverlander application.

Using the desktop version, I filtered for entries in the Warning category and literally went through them all. 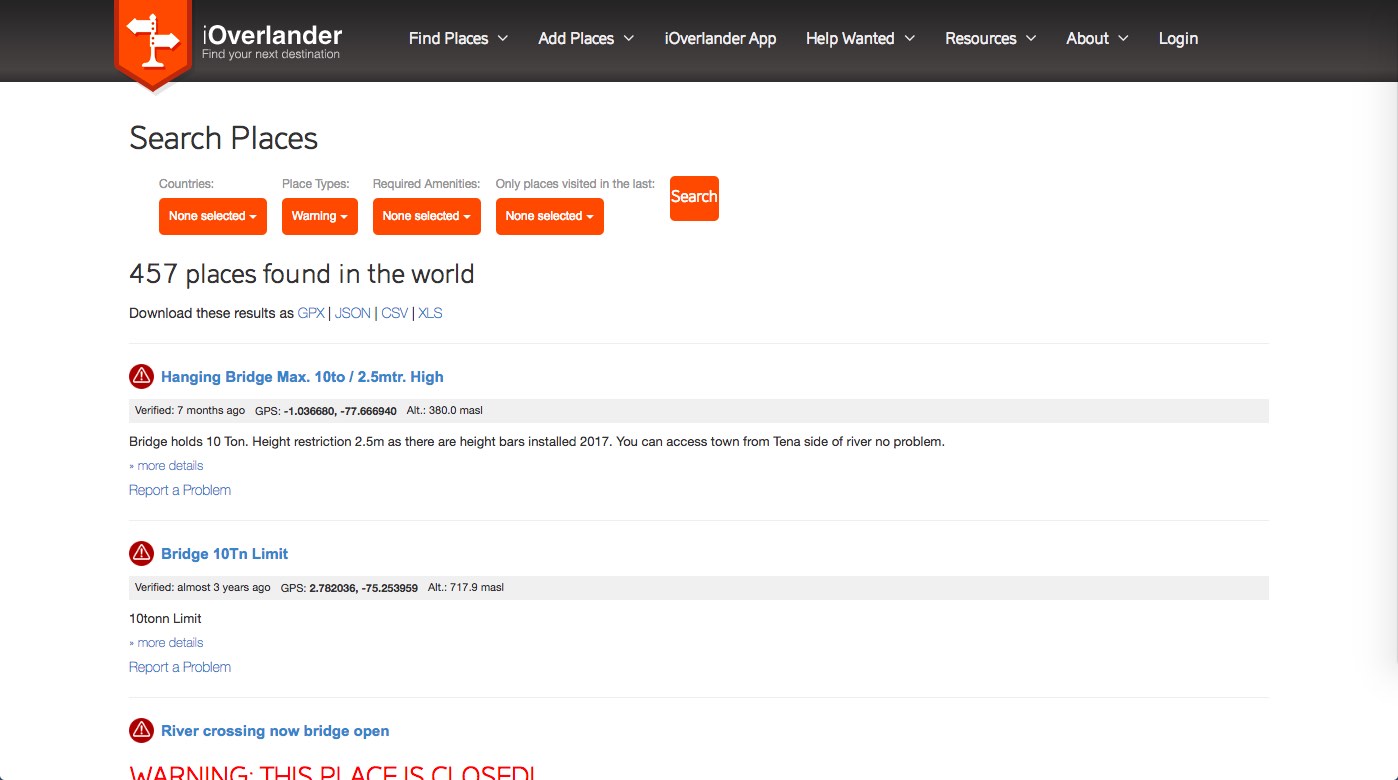 Not only did I find any warnings along our planned route (none of them were alarming), but I also ended up with a general feel for what does usually happen to overlanders - from situations with corrupt police to roadside robberies - and where specifically these most often occur.

If you do the same exercise before your big trip, you’ll gain an idea of what kinds of areas to avoid - and if anything happens, you’ll have some relevant information on how previous overlanders reacted.

If anything happens, make sure you share the information on iOverlander! The two main principles you have to follow are to use common sense and always act with caution. 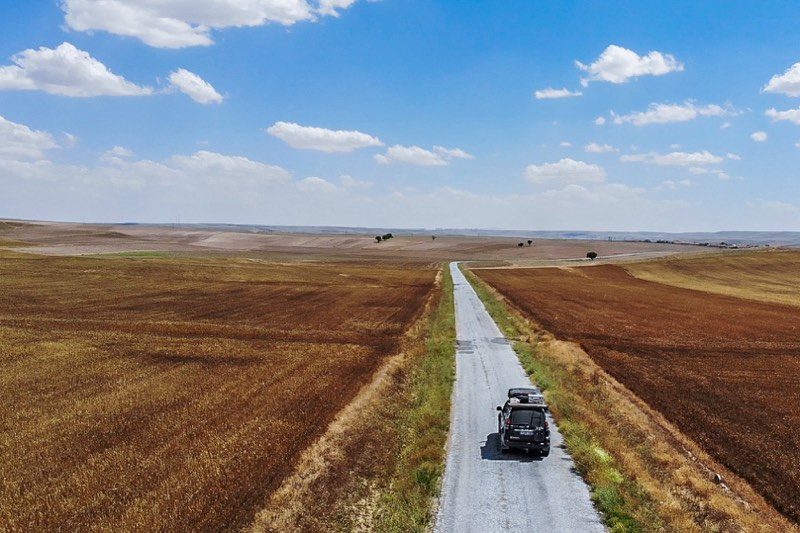 Be Prepared and Stay Safe

So in a nutshell, this is how we prepared and how we maintain our safety during our 5-6 month drive from Budapest to Singapore.

In the next post in the series, I’ll be talking about our devices used for navigation.

Sign up to our newsletter learn more about overlanding!