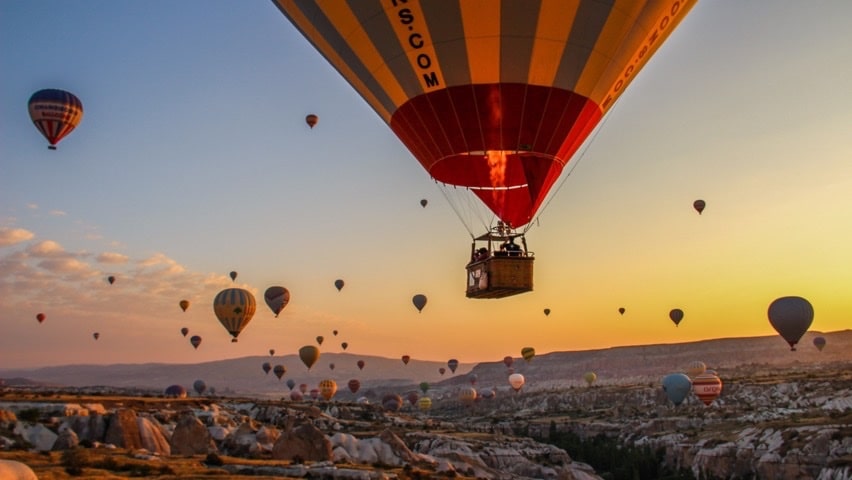 Cappadocia – A Great Stop in Turkey for Overlanders

We took small country roads from Hattusa to Cappadocia. It was extremely hot but we only had to drive for about 2-3 hours. Having a campsite already in mind (that we found on iOverlander again) made our arrival easy. We wanted to stay in a campsite as we planned to spend a couple of nights in Cappadocia. Eventually, we ended up staying three nights.

The famous hot air balloon flight was one of the things I definitely wanted to do. But seeing all the ATVs around when we were rolling into Goreme (the main tourist town in the Cappadocia area), I thought I’d love to do that too. Evelin wasn’t sure of the hot air ballooning, since she’s got fear of heights, but after some convincing and seeing some photos she was in!

Cappadocia is a unique place because of its natural rock formations and the beauty that’s derived from them. Houses, and today hotels, are carved out of the soft rocks of volcanic deposits, some of them being tower or minaret-like.

You can also see Mount Erciyes with its 3917m snowy peak. Mount Erciyes in the background

Little valleys and canyons criss-cross the area, giving endless opportunities for hikers, campers and other adventurers.

The Kaya Camping where we stayed had just the perfect setup for us. It wasn’t crowded, facilities were clean and we managed to secure a spot for ourselves with a view. It showed how great a roof-top tent solution is in good weather.

We arrived on time to set up our camp nicely and cook a great meal. My only worry was that we had to get up at 3.30am for our hot air balloon flight. That’s not even getting up early, that’s getting up during the night.

As it turned out, getting up after only a few hours of sleep was totally worth it!

The hot air balloon flight in Cappadocia was one of the best activities I’ve done anywhere in the entire world - it’s got to be in my top 3. Having said that, the experience is very ‘touristy’. You’re standing in the small basket of the balloon with 20 other people for more than an hour.

Everyone’s over-excited and pushing their selfie sticks into your face. But if you can somehow just ignore that, your focus will be on the sunrise from an altitude of 850 meters and with a view that’s completely unique.

About 150 balloons take off on more than 300 days of the year and since the weather is hardly ever disappointing, the view from any of those balloons is breathtaking.

Despite all the hassle of getting up early (and all the selfie sticks), I really recommend hot air ballooning in Cappadocia if you’re ever visiting the place. The early morning start also meant we were back to the campsite by half past seven in the morning.

We had a great breakfast, after which we had the chance to catch up on sorting out the hundreds of pictures and videos we took over the previous days.

A lot is happening during a day, so we end up with so many photos and so much footage that it’ll be hard to stay organized.

We didn’t leave the campsite again until we went for a quick run to the nearby vineyard. It was a really relaxing day, and we decided to stay another two nights instead of just one. Given that, I went on to book the ‘Sunset ATV Tour’ by one of the tour agencies. They were picking us up at 5.45pm the next day.

We spent most of the third day in Cappadocia in the campsite again, just relaxing and enjoying the view. We had our ATV tour in the evening so we used the day to work on our own online projects and just enjoy the fact that we weren’t sitting in the car.

This is also part of overlanding. Sometimes you just have to take some days off and enjoy wherever you end up after days or weeks of driving. Later in the afternoon, we met Maxime and Vince from Belgium. They’re traveling for one year and the first leg of their journey takes them to Kyrgyzstan overland.

They’re driving a Peugeot all the way from Belgium to Central Asia, after which they’ll be backpacking around the world.

I think doing a journey with an old Peugeot is quite brave! But this just proves that if you’re into overlanding, you really can drive anything! They joined us on the ATV tour in the early evening, after which we watched Belgium playing against Japan in the soccer world cup. Belgium won, so Maxime and Vince were very happy. Unfortunately, the ATV tour wasn’t as exciting as the soccer match.

I was really looking forward to some off-roading action with this little machine, but it was more about rolling from one place to another in a perfect line while negotiating hundreds of other tourists on dusty tracks.

While the tour was cheap and our guide was a really nice guy, I still wouldn’t recommend going any of these ATV tours around the area. I think it’s better to hike around and discover it for yourself. Perhaps do some off-roading on your own. If you end up adventuring during the night, make sure to have the best rock lights installed, as some of the drops on the side of the road can be very scary. Make sure to carry a good first aid kit in your bug out bag.

We were leaving in the morning and decided to drive together in a small convoy with Maxime and Vince all the way to Eastern Turkey, while talking to them through our best CB radios.

I feel like we haven’t done enough in Cappadocia. We had a great relaxing three days there but we haven’t really explored the area and haven’t learned much about its history.

We should’ve done a long hike in the canyons, and having a day to walk around town would have been great too. You can find Cappadocia on our Polarsteps map - and by the way you can read our Polarsteps review too.

So relaxing for three days meant missing out on a few things - though the upside is that we have plenty of reasons to come back someday. At that point we will make sure to visit Istanbul as well!