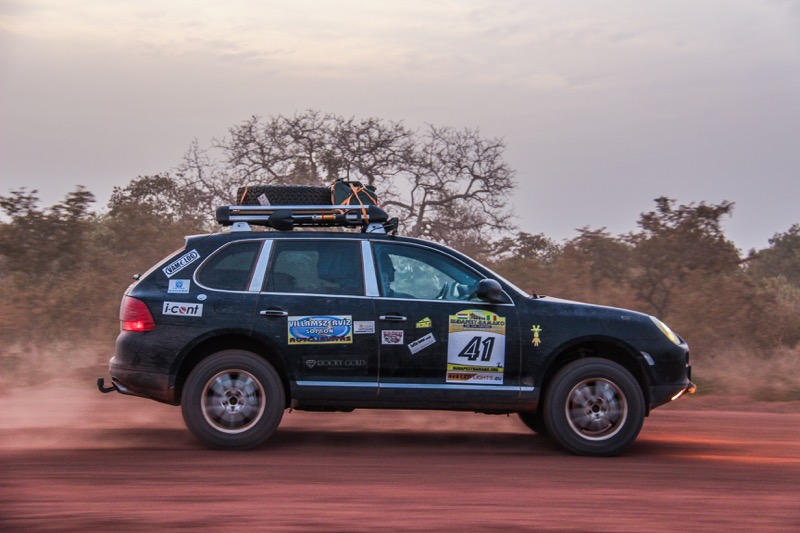 A Porsche is Not an Easy Sale in The Gambia

Gyuri and Jim with the Discovery and Mate and Aliz with the Porsche both planned on selling their rigs when they finished the rally. Both had local used car salesmen approaching them, as they had signs stuck in their windscreens.

However, only the Discovery had a serious bidder, and it was bought in the morning by a Belgian guy who lives in Banjul. Even though the rig is 28 years old, it took the Sahara Desert on as if it was an easy dirt track in New England.

I’m pretty sure the new owner will be happy with his purchase.

The Cayenne was a different story. Even though we saw a few around, with its 4.5L V8 engine it wasn’t attracting any serious buyers, so it was becoming more evident that Mate and Aliz would be driving rather than flying back. This was lucky for us though, since it meant we wouldn’t have to drive through Senegal and Mauritania on our own. Together, we decided to drive together until Dakhla in Western Sahara, stopping in Dakar, Senegal for a few days. Mate and Aliz would give Gyuri and Jim a ride to the Dakar airport from where their flight would depart.

A plan was in place so we had a relaxing afternoon by the pool. We also spent some time at the beach, and talked to some local guys there to get a grasp of how things were currently going in the country. As we found out, not well, but they didn’t seem too worried about it. At around 6pm, four of us went to have a nice fresh juice from one of the local vendors while watching the sunset. The juice stall wasn’t exactly crumbling under the pressure from too many orders, so we had a chance to talk to the vendor. As it happened, we were his first customers in the last 48 hours. Two days had gone past without any customers and apparently this was high season. Not very encouraging, but he was quite relaxed about it.

His motto was: “I’m waiting for better things to happen.”