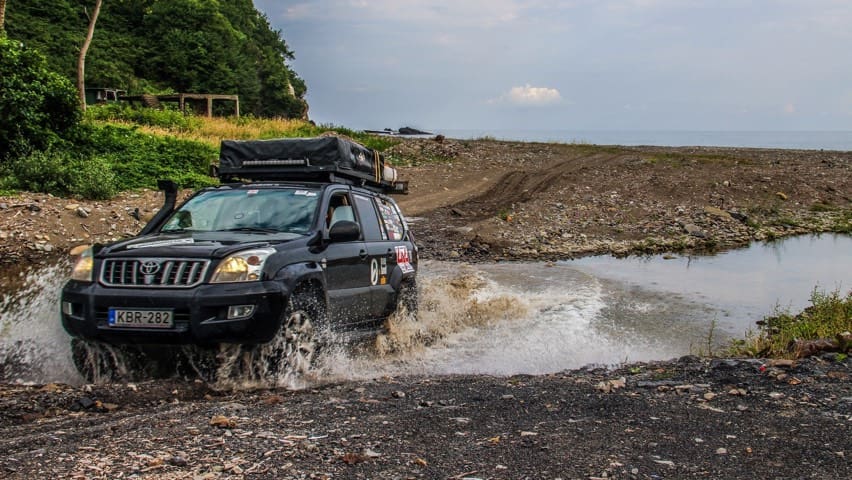 The rain had finally stopped following us when we approached Istanbul. It was extremely hot when we were sitting in the traffic jam of this absolutely huge city.

Earlier, we were discussing whether to stop and spend a few days exploring the city, but then we agreed not to.

As interesting as it would have been to see the sights, we weren’t keen on the hassle of negotiating the streets with a completely packed vehicle and finding a hotel with safe parking. We preferred to head for the beaches of the Black Sea.

We’ll discover Istanbul during another trip; it’s definitely on our list but maybe not while we’re overlanding. Finally we came off of the motorways and headed to the north coast of Turkey. We thought this area was more off of the beaten path than the southern part.

Using iOverlander (if you don’t know the app, check it out! It’s a great tool for overlanders - and completely free), we tried to find an ‘informal campsite’ or ‘established campsite’ at a remote beach.

We sort of found one eventually, and although the scenery was fantastic when we arrived, the actual place was littered with rubbish and it just wasn’t the best place for camping.

As we found later as well, trash is ruining many beautiful places along the coast. In our Trasharoo Review we emphasised how important it is for every overlander to carry their waste with them, no matter what.

The next morning we climbed to the cliffs of this area and had an amazing breakfast looking  overlooking the ocean.

Having left our jobs only about six months ago, it’s still a strange feeling to do such things on a weekday morning. Heading east, we were hugging the coast with a plan to head south the next day towards Hattusa, a UNESCO World Heritage site, and then to Cappadocia.

We were due for our first wild camping and iOverlander was just the tool for us to find a place for the night. Again, the camping spot looked like an amazing place from a distance, but yet again, the rubbish all over the beach spoiled the experience.

I was happy to leave in the morning. Hattusa was the capital of the Hittite Empire in the late Bronze Age that today can be visited from Bogazkale.

It’s fascinating to see the ruins of a civilization that was thriving 3,700 years ago.

The ruins are still really impressive - the city of Hattusa had tens of thousands of inhabitants and was a considerable size even by today's standards. Staying in Bogazkale gave us a chance to catch up with some housekeeping as well, like getting our laundry done as well as exercising a bit.

We then headed south to Cappadocia.

I’ve really been looking forward to seeing this place, and had seen countless amazing pictures and read about the area before with its hot air balloon flights, ATV tours and other activities you can do around the area. Discovering Turkey would take months, not days or weeks. This country has so much to offer for travelers, especially for overlanders, that I think we discovered ‘another Morocco’ for ourselves. We consider Morocco to be one of the best countries for overlanding. Cappadocia – A Great Stop in Turkey for Overlanders
Read More