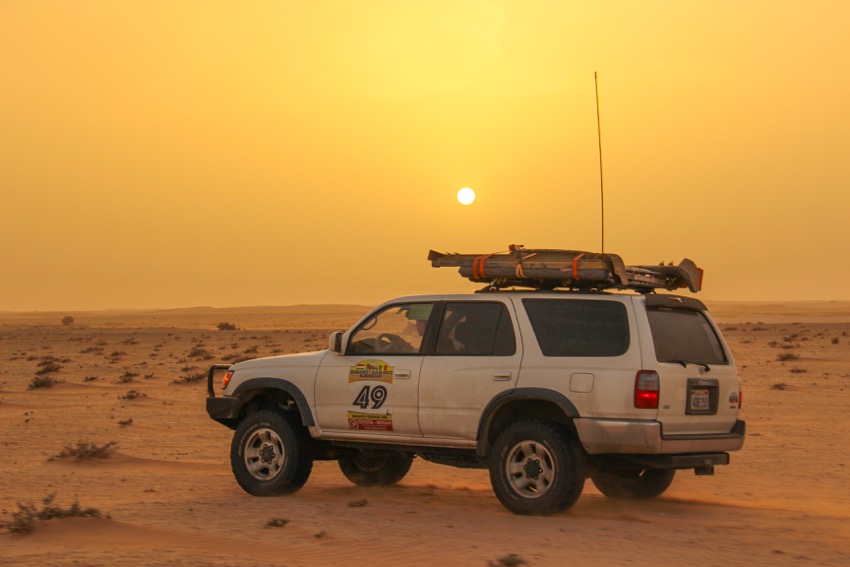 Overlanding in the Sahara Desert – A Challenging Day

The rally stage from our desert camp near Bou ​​​​​Lanoar to the bivouac near Atar turned out to be the most challenging of the whole trip. We had a very early start again because we knew the stage was not going to be an easy one at all. Marc from California, with his nicely upgraded 4Runner with an overlanding focus, joined our little convoy.

Marc is working for Google as a software developer and upgraded his truck, including the suspension, himself. We've posted an interview with him here, because his story is quite interesting.

We set off with Mirek’s Landrover Discovery leading the convoy. We were following the GPS points given by the rally organizers the previous evening and already had a feeling that today’s itinerary would be demanding.

Not long after we departed, Mirek got into a very soft sandy area where stuck quite badly, so someone from the convoy got their kinetic rope out and we were going to help get Mirek out. At this point Mirek didn't know he had lost the driveshaft

However, when he tried reversing again, someone noticed the actual reason why he got bogged down so badly and why he couldn’t get out: he had lost his driveshaft sometime that morning. It was a funny sight at first, but then we realized that this also meant he couldn’t continue with us that day.

We were specifically told by the organizers that we needed proper 4x4 equipment for this stage, which, not kidding, included 4-wheel drive with low gears.

While we were still chatting with Mirek about his options for getting back to the main road, drive to Nouakchott and try to find spare parts, another few carts appeared and one of the guys yelled, “Is someone looking for a driveshaft?”

That was beyond funny, first losing a driveshaft in the Sahara Desert and then someone else showing up with it, having found it a few miles earlier in the sand. After this we set off to tackle a big section of the stage driving parallel with Mauritania’s only railway track. Mauritania is rich in iron ore, and this 2-mile long train transports it from the mines to the port of Nouadhibou.

Since trees are hard to find in the Sahara but there is lots of iron ore around, instead of timber sleepers under the tracks, every single sleeper is made of iron – I guess concrete sleepers would be quite expensive here.

It was a weird sight, and the iron sleepers turned out to be a bit dangerous too as in some sections, especially later in the evening, we had to actually drive on the tracks as we kept getting bogged down. It was a lot of fun to drive this stage during about the first two thirds of the day, but what we didn’t realize was that we were very much behind schedule.

The dedicated camp area (that was also used by the Dakar Rally in the ‘90s) was still 200 miles away, when we had another 80 miles left driving between and on top of sand dunes.

As fun as it was, it later it turned into a challenging task that we had to complete in order to get to the supposedly safe campsite where the military was present again.

Even during the day, we saw military vehicles escorting the whole rally convoy a couple of times. We desperately wanted to reach the camp when it got dark as apparently, camping in the desert on your own (meaning 3-5 cars) is not advised at all. Checking the back for damages

Driving on sand can be a tricky exercise. You have to keep your pace up so as not get stuck, but you also have to be careful with sudden drops.

As it happened, even though I saw it coming, one of these drops after a sand dune made our alu box full of dry goods, as well as a plastic case, fly to the back of the truck.

The alu box hit the back window, causing the tint foil to rip, but this was the smaller issue. In the plastic case that also went flying were the spare filters as well as the spare engine oil. Bad idea. Don’t keep oil inside, keep it on your roof rack! I learned this lesson the hard way.

The container cracked so that the oil started spilling onto the nice carpet my Dad and I had installed on our DIY drawer system. It was a nightmare to clean up. To save the oil, I later poured it into an empty water bottle as I had planned to service the rig somewhere in Morocco on our way back. Where we would have never thought to see anyone, we still occasionally came across people in villages that looked mostly abandoned, with no trees or animals around as far as we could tell.

Every time we went past these settlements that barely had any non-collapsed buildings though, people appeared to look curiously at our convoy.

I don’t think I’ve seen any other place in the world yet where life is tougher (although I still have a lot of places left to visit). One indicator of how hard life is in Mauritania is slavery. Only in 2007 did the government pass a law that allows slaveholders to be prosecuted. 2007! There are different statistics and estimates on how many people are still victims of slavery in the country, but even the most conservative figure is shocking; according to the Global Slavery Index the number of slaves is estimated to be 43,000, but there are much higher estimates as well. After navigating between the sand dunes for hours, helping each other out constantly when someone got stuck in the sand (we got bogged down twice), by midnight we got through the sandy section and reached the paved road leading to Atar and then to the campsite. But just when we thought our hurdles were over and we were only 2-3 miles away from the bivouac, the hedges, ditches and fences prevented us from finding it. Having started with only half a tank of fuel (I have a standard fuel tank), I used the diesel from both of my jerry cans as well as an extra one kindly given to me by Jim and Gyuri.

My range on the dashboard was showing as zero for at least 20 minutes when Marc finally found a way to the bivouac. We had a very warm beer and set up our tent at around 3.30am.