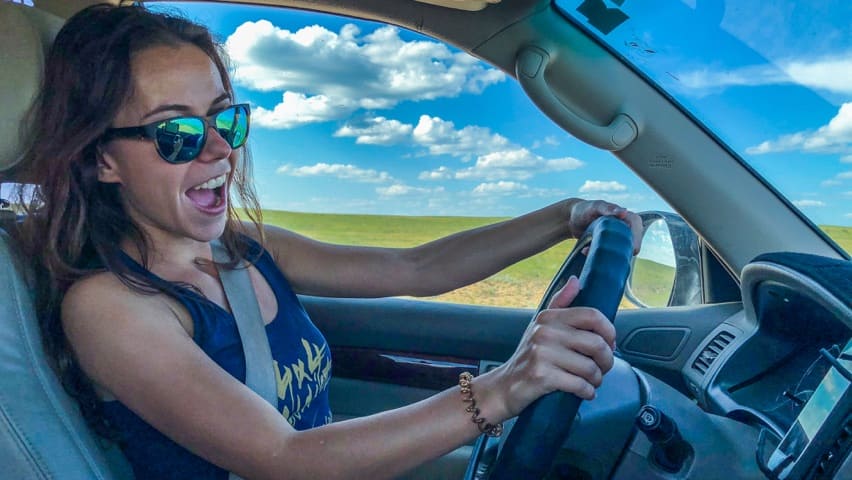 We rolled into Astana quite late at night, just before reception closed in the Nomad4x4 hostel. It was raining and the forecast didn’t look much better either.
Since we failed to drive on our planned southern route to visit Baikonur and the Aral Lake, Astana was an attraction much further north that I was looking forward to as a sort of compensation for missing out on the southern part of the country. Astana became the capital of Kazakhstan 20 years ago and you’re reminded of this fact throughout the country by billboards. I think the billboards were promoting the celebrations that was held in early July.

There were fireworks, concerts and lots of other events. Astana actually means ‘Capital City’ in Kazakh.
Almaty used to be the capital, but the country needed a shiny new capital, hence the old Akmola was developed into this modern city.

I think I expected a lot more from Astana. It’s an amazing achievement to build a city like that in such a short time but as with a lot of modern cities, it lacks something important: history.

The countless monuments, towers and new statutes don’t counterbalance the lack of ambience that history adds to any city. It doesn’t need to be several centuries worth of history, but it seems 20 years of recent past doesn’t make it for me. We strolled around the center of the city and visited the tent-like shopping mall that’s about as horrendous as I expected it to be.
We spent a couple of days in the city and, since the weather continued to be appalling, caught up with picture editing and blogging again.

It was in Astana where we realized that if we wanted to make it to Mongolia on time (meaning without rushing too much and maybe going to the Horizons Unlimited overlanders meeting in Ulaanbaatar), we’d have to abandon the plan to go south to Lake Balkhash and to Almaty, because it would just take an enormous amount of time.
The new plan was to go east and, avoiding main roads, drive through the Karakaly National Park, then head towards the Altai region in Kazakhstan where there was supposed to be a spectacular mountain road built by Austro-Hungarian war prisoners following World War I. After leaving Astana, we were stopped at a police checkpoint where it became obvious that we didn’t have a valid vehicle insurance. I read online somewhere that the vehicle insurance you pay for in Russia is valid in Kazakhstan but I didn’t double check the information.

As the polite policeman pointed out, that was not the case so thanks to Google Translate, he advised how much the fine was going to be and that I needed to follow him to his booth so that he could complete the paperwork.

Google Translate worked so well again that by the time he was ready to fill in the paperwork about the fine, we’d had a conversation about our trip, the planned route within Kazakhstan, the Altai region and so on.

Eventually he decided to only warn me for not having insurance and let is go without issuing a fine. He advised us not to even try to drive east from Karaganda due to the non-existent roads.

This made me curious since Google Maps was clearly showing a road going that direction from Karaganda. Within a couple of hours we arrived in Karaganda. About 20 miles from here the main attraction is a Gulag museum that we visited.
This was the Karlag Gulag and during its history over 1,000,000 people suffered here.

Made to work for one bowl of a soup a day, the inmates were brought here from all over the Soviet Union and were usually charged with being “enemies of the people”. Karaganda is a large city south of Astana, and has a decent Toyota dealership and service where I decided to get the regular oil change done after 6,000 miles from Budapest.

Alina and her crew at the Toyota dealership were extremely nice. Alina speaks very good English, and I had a great coffee at the lounge from where I could watch my vehicle being serviced on a screen. It’s an awesome feature. With Alina and Denis

After they finished the oil change they offered a free complete wash and check of the vehicle. I knew I should have done more with respect to mechanical checks during our preparation for the journey, so I was very happy to get the vehicle all checked out at an official Toyota service.

Shortly, the service manager came back with a list of recommendations of what should be done soon and they were ready to send me on my way, but I was keen to get some important items on the list done.
This included a differentials and transmission oil change, installing new brake pads (I had these parts with me actually), and replacing the front right wheel bearing that was worn out.
On top of this I also asked for a proper radiator wash from both sides, hoping this would resolve the overheating and air-con issues.

The servicing happened a few days - and several hundreds of miles ago - as of this writing and I’m happy to say the Land Cruiser handled all sorts of terrain, including mountainous roads in the heat, without the temperature gauge moving at all.

On top of this we have fully functioning air-conditioning again, which makes a huge difference. You only realize when you don’t have it just how much comfort it provides in 95 degree (36 C) temperatures. Changing all the transmission and differential oils all makes it easier for the drivetrain to do its work, so less heat is generated, but I’m pretty certain the radiator wash is what solved the overheating.. We collected so much dust and sand in Senegal in January that the radiator just wasn’t getting sufficient cooling air anymore to properly regulate the engine temperature.

It’s pretty bad that I didn’t get all this basic works done before such a long trip, but I only encountered the overheating issue in eastern Turkey.
I was very happy with a shiny, clean, all serviced rig when we left Karaganda the next day.
The Karakaly National Park was about 2-3 hours away.

We were both really happy to see some hills and forests there after so many days of only seeing the flat Kazakh Steppe, which gets quite boring after a while.
There was a parking lot next to a lake that seemed to be for people who leave their cars when they go trekking. We asked the guard there where could we stay and he directed us to a nearby place with wooden huts.
We couldn’t rely on iOverlander this time as there were no check-ins along this route at all.

The place where we stayed turned out to be a sort of campground that mainly had small log houses but also had a grassy area for campers. This part of the world is really off the beaten path, so when we turned up and asked for a place to park our car so we could open our rooftop tent, we became a bit of an attraction.
We were immediately invited by some nice people from Karaganda to share some vodka and plov (central Asian rice dish with meat).

None of them spoke English and we don’t speak Russian or Kazakh, but with the help of Google Translate and Vodka Translate, we had a 2 hour conversation with them.
This was not the first time we noticed how nice people in Kazakhstan are. They’re very welcoming and really appreciate when people make an effort to visit their country. I don’t know how to describe the road between the Karkaraly National Park and Semey. Washboard gravel, rocky potholes and muddy parts varied with remains of asphalt. 10-20 mph was sometimes the fastest we could drive.

We really felt the fact that we were very far away from home. The road conditions are so bad that people don’t even consider a road being there, which was the reason why the police guy in Astana told me not to go that way. Halfway between Karakalinsk and Semey we looked for a place to stay for the night, close to the road but still out of sight.
Since it was a very remote area and we didn’t know how safe it was to stay there, we decided to finally try out the sleeping platform that’s basically the top of the drawer system with the flap usually folded to the left, now moved to the right, thus creating a 59in x 42.12in (150 x 107 cm) rectangle. It's not the most sophisticated system, but it works

It’s not big, but with my feet dangling it’s comfortable enough for sleeping inside the vehicle every now and then. It’s absolutely only a solution for occasions when we can’t or don’t want to open the rooftop-tent, such as if we want to sleep in a village or town, if the weather is appalling, or if we’re in a very remote area and are unsure if it’s safe to stay. Sleeping inside the car just adds a little bit to our security, as we’re locked in and the key is in the ignition should we come across a few drunk people who don’t want to leave us alone.

What are the chances of that in the middle of nowhere?

Probably close to zero, but as we’re only a couple and there’s no other vehicle with us during most of the trip, it’s better to be careful.
Does this mean we don’t wild-camp on our own? Absolutely not. It depends on on the location and the surrounding area. We’ve had several nights wild-camping in the wilderness using our rooftop tent.
If you ever drive through Kazakhstan, the best reason to take this road from Karakalinsk to Semey is that during all that way it feels very remote, very much off the beaten path. Semey didn’t look like a nice city. We actually wanted to go all the way to Oskemen, but it would have been too far so we settled for staying a night in Semey.

Semey is actually a new name for the city that was once called Semipalatinsk.
Since this was the center of the primary testing area of the Soviet Union’s nuclear weapons, the officials of the town were afraid that investors would keep away when hearing the name, so they renamed it to Semey.

The Soviet Union conducted hundreds of nuclear tests in the Semipalatinsk Test Site, and the impact of radiation exposure on the local people and the environment was hidden by Soviet authorities. Oskemen (or Ust Kamenogorsk in Russian) was not too far away from Semey, but we only wanted to drive until this point because there had been an annoying metal noise coming from the front left wheel ever since we left the Toyota service in Karaganda.

I knew it was something to do with the fact the brake pads were replaced but I couldn’t figure out what exactly was making the noise. Giampiero, one of the guys we’re going to cross China with, recommended a mechanic who was going to take a look at the issue the next day. This made it the third time we had to take the vehicle to a mechanic, but luckily it turned out to be such a tiny issue that I got annoyed with myself for not figuring it out on my own.

The thin metal sheet behind the brake disk was bent, causing an intermittent and annoying scraping noise.
With that fixed by the nicest mechanic I’ve ever met, we were ready to take on the Altai Region of Kazakhstan!

UPDATE: When we were staying in the city it was called Astana, however, today this modern metropolis is called Nur-Sultan.