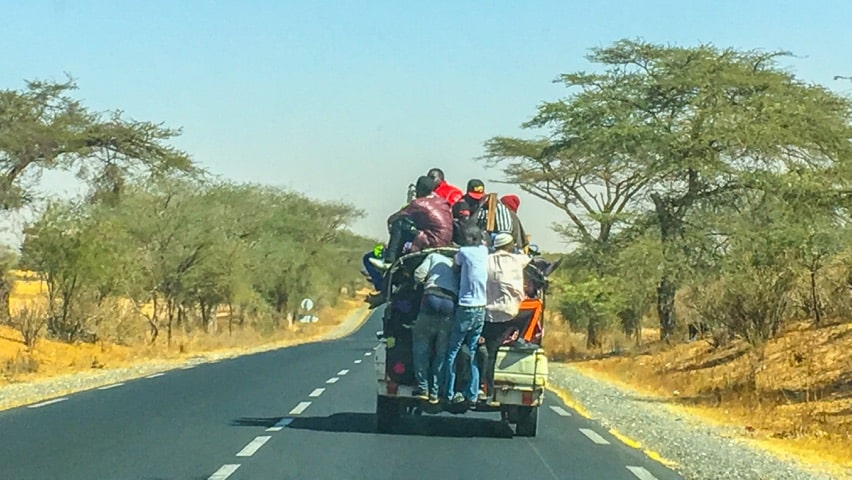 Heading Back to Mauritania

We were quite glad to be driving with Mate and Aliz on our way to, and the next day through, Mauritania. Our goal for the day was Nouakchott, 350 miles and a border crossing away.

We were considering stopping in the Zebrabar again to look around St. Louis, but there were some recent riots in town so we decided to skip it.

The main road leading north from Dakar is quite smooth, but you have to be careful with trucks and donkey carts.

We noticed in Dakar that public transport is run by small, privately-owned buses and there are probably not enough of them, so we often saw people hanging off the back – and not only in town either. We saw several buses and small pickup trucks with dozens of passengers holding on for their lives by very little when their vehicle was driving 60 miles an hour.

The main event for the day was the border crossing into Mauritania. It was relatively easy, albeit with the usual scam attempts by local ‘helpers’. We paid our €40 for stamps and ‘barrier fees’ and were on our way relatively quickly. This was the same border crossing as the one we used on the way south at Diama, so we were driving through the Diawling National Park again with all the flamingos, pelicans, storks and warthogs. After this part we had the dreadful road leading to Nouackchott, with its endless number of massive potholes that are difficult to negotiate even with 4x4 trucks. It was dark by the time we arrived in the capital. We knew we had the option of staying in the hotel where we stayed previously, but as they quoted a much higher price for us than last time we decided to stay elsewhere. The other hotel was equally expensive (€100) but quite nice. This fact did not really matter to be honest, as we only planned a short sleep so that we’d be able to get to Dakhla by the end of the next day. ⁣Exercising in the Gobi. It's very important to