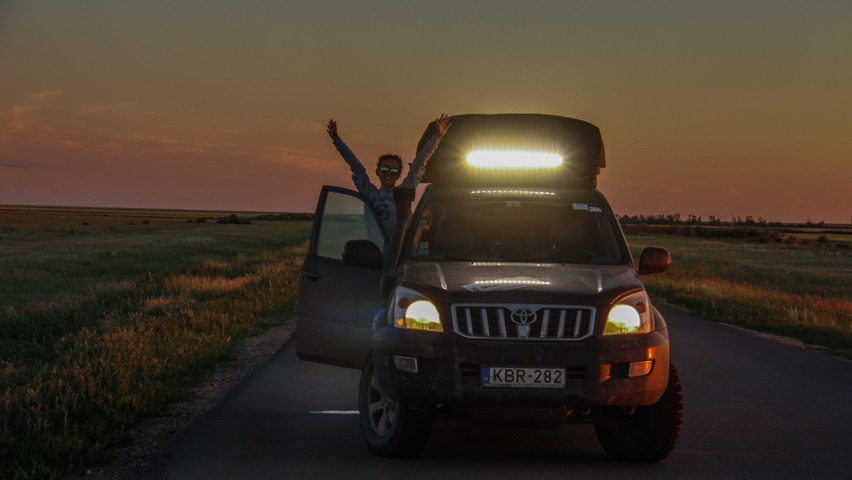 Essential Overland Gear or What We Use – Part III: Lights

As of this writing we are sitting in the Kazakh Steppe, totally alone with the next village at least 60 miles away.

We’re waiting for the longest lunar eclipse of the 21st century and couldn’t be in a better location to watch.

This has also reminded me to write about our lights, from the smallest ones around the campsite to our awesome Lazer Lamps LED bar we have mounted on the front of the roof rack. First of all,  we each have a headlamp to use around the campsite. It’s an extremely useful tool when we’re doing stuff around our rig or just getting ready to go to sleep and need both hands free.

In addition, we have a powerful 18650 torch and a couple of LED camping lanterns.

To use above the fold down table at the rear door, I installed a small light from a local hardware store, though  to be honest it’s quite inefficient. With respect to the vehicle, I didn’t replace any of the interior lights, but only due to lack of time. I intended to replace all of them with LED bulbs but never get around to doing this before we left. However, we do have a very powerful (adjustable) USB map reading light.

As with the interior lights, I intended to replace the H4 headlight bulbs with LED ones, but once again didn’t do so due to having too many other things to worry about before our departure. However, the reason why it doesn’t really matter that we use OEM headlights is that we have an immensely powerful T-16 LED light-bar sponsored by Lazer Lamps.

To illustrate how powerful this compact light-bar is, have a look at the following pictures: As I mentioned, the light-bar is sponsored by Lazer Lamps, but my praise  of the product isn’t biased; I actually purchased a 36’’ light-bar before the trip, but since it doesn’t even come close in lighting power to the T-16, there was no question which one I’d be taking with me on the trip. Features of the Lazer T-16

As the name suggests, the lamp features 16 high output, 11-watt LEDs. It also includes a dual-optic reflector system, with some parts spreading light close to the vehicle and the vacuum reflector focusing on the far distance ahead. It’s quite unbelievable how it lights up everything ahead of the vehicle. I mounted it using the metal side brackets that fit right on to the front bar of the modular roof rack.

The housing of the T-16 is made of aluminum, so it’s very light. This is an important factor, since keeping the weight of the vehicle low was a priority for me when preparing for the trip.

Driving After it Gets Dark

As part of our safety precautions, we tend not to drive after sunset. This is not only because it’s difficult to find a campsite in the dark, but also because roads are so much more dangerous at night, and we don’t want to take any chances. Sometimes though, driving when it’s already dark is unavoidable during our trip. We entered Russia at midnight, for example, but at the time of finishing writing this post in Kazakhstan, we have also just completed a long drive at 11.00pm.

On these occasions, having a powerful LED light-bar like the Lazer T-16 is invaluable!

Auxbeam Review
The first in a series of LED light bar reviews, welcome to our Auxbeam Review! Things have come a long[...]
Read More