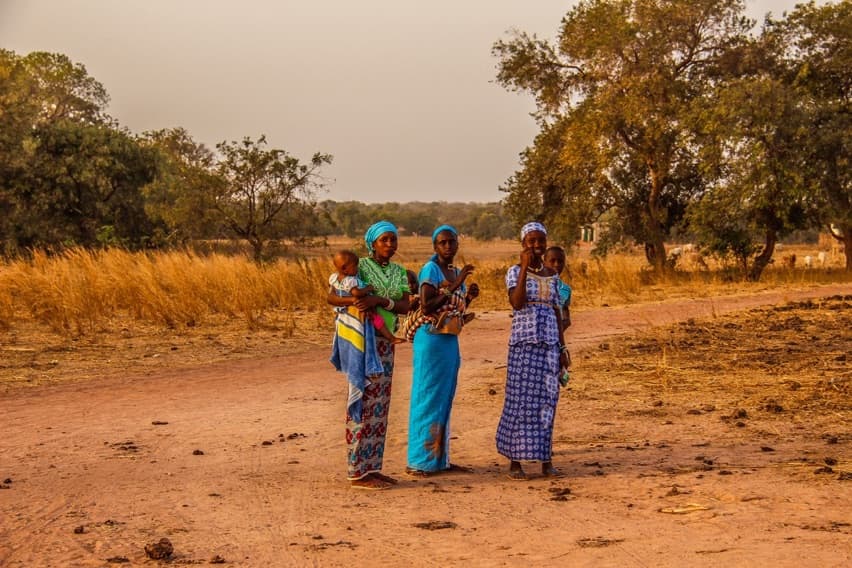 We Drifted Down The Gambia River On A Ferry

I wasn’t even surprised anymore whenever we got lost. We wanted to go off-road and follow the provided GPS coordinates but the itinerary proved to be very challenging.

We ended up on a track that turned out to be a dead end; the Gambia River didn’t let us continue, and the track was so narrow and overgrown by vegetation that the Toyota suffered some very bad scratches on the side.

I had to walk in front of the truck to lift any branches that would have been too low for the rooftop tent and jerry cans on our roof rack. Getting lost, however, meant that we stumbled upon a village made up of only a few huts, relatively far from the main road.

We had the opportunity to park our cars outside and just walk in, and the villagers were really nice and friendly.

They showed us around the village that couldn’t have been bigger than 100 ft x 100 ft. It was fascinating to see how they live. They explained they have a leader, and showed us their best room and their well. It’s hard to comprehend how different lives can be on this planet. We then headed for the Gambian border. It wasn’t an easy crossing, with too many people arriving at the border around the same time.

Understandably, the officers just couldn’t handle that much traffic. There was a checkpoint where every team that took part in the rally got charged 20 Euros.

Allegedly it had something to do with our smoother border crossing, but when we spoke to other independent overlanders, they said they’d never had to pay at any border crossings on the same route. Entering The Gambia meant I could actually talk to the locals, as this country used to be a British colony rather than French.

It is a lush, green country where we felt “we are really in Africa” even more than in Senegal.

Just as in Senegal, women were carrying everything on their head, dresses were colorful and the air was hot, but somehow the experience and our impressions were more intense.

There was another thing we became aware of that we had seen before, but which wasn’t as noticeable as now: women were working hard and doing dishes, cooking, working in fields, walking to and from markets, etc., and during all of this they carried their toddler on their back.

The men, on the other hand, were very often just lying in the shade and talking to their equally inactive mates. We noticed this phenomenon throughout the whole region, but in The Gambia it was more obvious. Not long after the border crossing we had to cross the Gambia River.

The river snakes through the whole country, which – other than the Atlantic Ocean to the west – is completely surrounded by Senegal.

So the river is a vital element of the country, but there are hardly any bridges on it. That means there are painfully slow ferry crossings with very small capacity.

When you overland through The Gambia it definitely adds to the experience. Our experience became even more memorable, as during our first river crossing the ferry’s engine suddenly stopped!

While we were drifting down the hippo and crocodile-infested water, a mechanic got into a small boat, jumped on the ferry and into the engine house, quickly fixed the engine and off we continued on our journey to the other side.

The whole event lasted less than 10 minutes, but it seemed longer while we were on the barge. Above: Drifting down the Gambia River Janjanbureh, where our campsite was for the night, was about 2 hours drive away. The sunset was as color-rich as some of the dresses we’d seen, but it was dark by the time we arrived.

In the campsite we had to be careful not to leave any small items lying around, as curious monkeys were taking anything they could get their hands on. 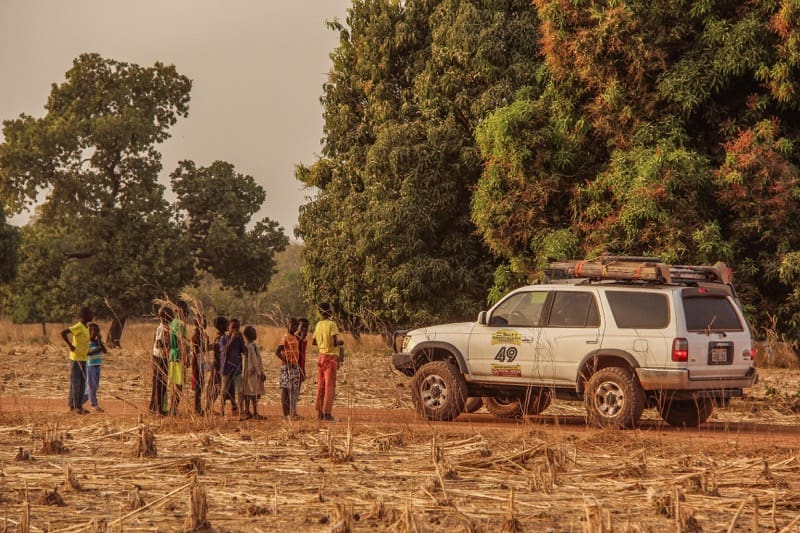